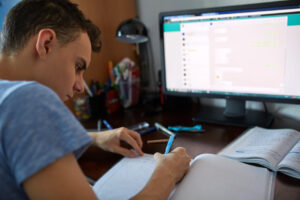 Report cards are in, from across the country.

Lots of people will be burning them out by the mailbox, before anyone gets to see them.

That neatly sums it up.

So we can gladly report that the Kentucky Board of Home Inspectors (KBHI) got this one right.

If the point of CE is to actually learn, online fails.  Not just a wee bit Miserably.

You could not buy a better, broader real life test.  The results were consistent, across regions and educational levels.

“Virus Closures Leave Students Falling Behind,” headlined The New York Times in its review, about the same time as The Wall Street Journal summary.  There was more, but you get the drift.

The lessons were basic – so basic that many take-aways are no real surprise.

But there was one surprising exception.  Almost 10 million students have no internet connection, and Kentucky was a leader in that group.  Kentucky was one of the top five states with the highest percentage (26%+) of unconnected students, who could not go online if they wanted to, The WSJ reported.  (PLI discovered this over three years ago when we began working on digital classes.  Turned out that around 20% of Kentucky homes were still on copper wires, and another 20% only had the old dial-up connections.  Shocker.  It’s gotten better but only a little.  Still today, over 1 of every 5 homes in Kentucky have no internet, either by cell phone or at home.)

The attractions of online courses for schools have been obvious for years.  Profits for downloads or discs are way higher than for live, in-person classes.  What economists call the “cost of reproduction” is nearly zero.  Think of it like the difference between the cost of a plastic CD (about 13 cents) versus the const of a live concert, every time you want to hear a song.  Make that CD a download, and the cost of adding one more student approaches zero.  Profit margins explode.

So download sellers make a bundle, compared to live.  But the proof is in the pudding.  There is practically no food for the brain for buyers.

Reminds us of our high school French class on TV in the auditorium.  Never did learn French.