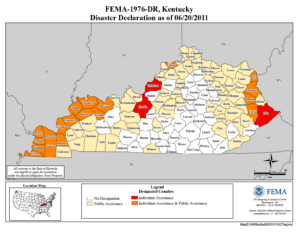 About 6 million properties have major flooding risks that do not show up on federal flood maps.

The new maps of flood risk come from homeowner-centered First Street Foundation.  They are available – for every home – First Street announced June 30.

Just enter any address and up comes the “Flood Factor”™ for that home – from 1 to 10 (minial to max).  Scores are available free to anyone.    Go to https://floodfactor.com.

In comparison, FEMA leaves out about 6 million of those homes.  FEMA maps show just 8.7 million homes with the same 1%+ annual flood risk.

FEMA (the Federal Emergency Management Agency) does not map many counties.  In about 3,300 counties, the FEMA maps are over 15 years old.  Some of the biggest differences between the maps are in inland states.  Many neighborhoods in Nashville were not on FEMA maps – and, so, had no flood insurance — when they were wiped out by the catastrophic flooding in May, 2010, for example.

Homeowners “should explore the differences between the maps to build a more comprehensive understanding of flood risk,” FEMA.  “The maps do not conflict with each other, rather they compliment one another.”

Home inspectors are not required to report flood risk, of course.  But the more tools we can give clients to protect themselves (like a remind to transfer warranties, for instance), the more everyone involved gets protected.  And gratitude is a deeply moving emotion.