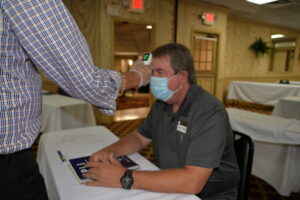 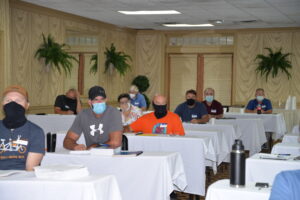 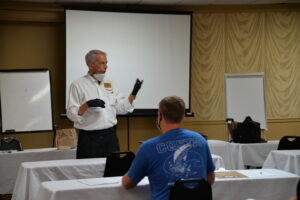 DEC 31 DEADLINE.   MFD BY BOARD IS DEAD IN THE WATER

Are you scratching your head over a Ky Board of Home Inspectors (KBHI) email that showed up out of the blue?

“What’s this nutty 2 page pile of legaleze in my email?”

It’s the KBHI setting a trap for the unwary, pulling a switcheroo on the rules for renewing — all at its August 18 Zoom meeting.  That piece of legal gobbledygoop in your email?

It set a Dec. 31 drop dead deadline for completing all renewal applications.  You’d think it could get that out in a sentence or two.

But it’s trying to laboriously work around a little problem:

The new deadline almost certainly is unlawful.  You can forget the “almost” if the Board ever tries to enforce it after Dec. 1.

No matter what, the “deadline” stands in defiance of the applicable law, SB 150, and the Governor’s Executive Orders.

No board action may lawfully do that.

There is, still, a (very) remote possibility that the Board might get away with it, and no inspector would get trapped in that case.  It all depends on when the Governor’s State of Emergency gets called off.

If it actually triggers, inspectors renewing in December and November get the worst shake.  But any inspector can get trapped now – until the Board wakes up.

Enforcement almost certainly would be unlawful if the State of emergency lasts past Dec. 1.

To put a finer point on it, the KBHI can blow all the smoke it wants.

But the law puts that smokey object out in the ash tray.

All licensees get “at least 30 days after the expiration of the state of emergency” to “complete” applications or pay any fees – “before any action may be taken against their license.”

The trap is a new, out-of-the-blue “deadline” set to spring closed on Dec. 31, 2012.  That’s the Board’s new (apparently) drop-dead deadline for all 2020 renewal filings, complete with everything required.

Since March, for nearly half a year, inspectors have been counting the March 31 decision to allow up to 60 days from whenever the KY State of Emergency ends to finish getting renewal applications and paperwork filed.

Suddenly, for no apparent reason and without a word of warning, the KBHI turned Indian giver on that deal this week.

It repealed that solid March 31 policy.  (Disclosure:  PLI helped initiate and draft that policy, in conformity with SB 150.)  Inspectors counting on that now have to plan again.  Will the Board actually try to defy SB 150 and the Governor?  Or will it change its tune – back to one that works with SB 150?

For now, with no notice to inspectors or comments from anyone before the change, the Board voted to send out that two-page piece of legaleze.  That should clear things up — like smoke clears the air.

Have you noticed your new license expiration date on the Board’s website, where people who check inspectors look?  Every active inspector now “expires” on Dec. 31!  Even though no law says that, SB 150 contradicts that, and no regulation says that.  Even so, some inspectors will seize the opportunity, relying on this newborn email, and those new expiration dates on the board website, to wait until the last moment — like December — to renew.  (We suggest you stick with your birth month renewal date.  What the Board votes, it can unvote, with just as much notice. That would get it back in line with the law but leave dawdlers out in the cold.)

The move was wrong on both the law and the facts.

Kentucky’s emergency Covid-1 legislation, SB 150, requires that all licensees be granted “at least 30 days after the expiration of the state of emergency” to “complete” applications or pay any fees – “before any action may be taken against their license.”  SB 150 Sec. 1(1)(d).  Meanwhile, SB 150 is blunt – “License may continue to practice their business” without interruption” until then.

So does the (unsigned) “Message” to home inspectors that went out as a cover letter with it.

“All license renewal requirement for 2021 remain unchanged at this time,” the “Message” claimed.  But that is not the message of SB 150, quoted above.

If the Covid-19 crisis keeps rolling into 2021, then that all licensees must be granted “at least 30 days after the expiration of the state of emergency” to “complete” applications or pay any fees – “before any action may be taken against their license.”  SB 150 Sec. 1(1)(d).

For now, by far the most likely situation in December is that Kentucky will be in a “twindemic.”  Covid-19 will still be rampaging.  Today the state is within a hair of two grim milestones.  Kentucky will be topping 1,000 Covid-19 deaths (the total was 966 as of Wednesday, 9/2).  Kentucky also will go over 50,000 cases any day now (the total was 49,991 on Wednesday).  Sunday (8/30) Kentucky reached a record for new cases — 4,503 new Covid-19 cases in one week and climbing.  Meanwhile, the usual seasonal flu will be in full force. December through February are peak months for flu.  (Data on flu is below.)  So the best forecast is a double whammy this winter, the worst twindemic flooding hospitals since the Board was formed in 2005, with Dec. 31 right in the middle of it all.  Which means you can bet the State of Emergency still will be cooking. At the very least, the smart move is to wait until we know, instead of just assuming the world will change on a magic date.

Whatever that might be, the law is a lot clearer.  SB 150 states the rule:  all licensees must be granted “at least 30 days after the expiration of the state of emergency” to “complete” applications or pay any fees – “before any action may be taken against their license.”  SB 150 Sec. 1(1)(d).

(2) “which is not clearly authorized by statute” or

Second, “any administrative regulation in violation of this section or the spirit thereof is null, void, and unenforceable.”  KRS 13A.120(4).

A regulation contradicting SB 150 would be “null, void and unenforceable.”  For lesser actions trying to end-run the rules for regulations, that result is a given.

So the right message to home inspectors is that the Aug. 18 Board action also is “null, void and unenforceable.”  Or simply a misguided, foolish waste of time.

Wrong on Facts Too.

The story behind the Aug. 18 “deadline” was that in-person instruction was practically unavailable, or limited to groups of “ten or less.”

But neither claim is true.  No data presented at the meeting supported either claim.  We may be getting used to this sort of thing in an era of fake news and political lies, but it remains tedious and distracting for inspectors and beneath true public servants.

As matter of fact, PLI has been teaching in-person courses since mid-June.  Bluegrass announced it was opening class in early July.  Both schoools told the board that in May.  Today, there are classes at PLI, Bluegrass, AHIT, and P2P, to name a few larger providers.  Sure, there have been class size limits.  Limits typically come from the venue, such as rules for the hotel where classes are held.  There’s that 6-foot social distancing, masks, hand sanitizers, gloves, temperature checks, and all those safety rules.

So sure, it has difficult and more expensive for all providers.  (Even so, PLI did not hike its tuition.)  But if colleges and public schools are re-opening, it does not take a genius to figure out CE class can too.

Only one CE supplier so far has cancelled classes through the end of this year.  That would be KREIA, the Kentucky Real Estate Inspector “Association.” We’re sympathetic.  KREIA’s problem is KREIA’s business model.  It does two class sessions a year, compared to say monthly sessions for other providers, like PLI, partly because it has no full-time faculty.  (Disclosure:  We basically wrote KREIA’s Business Plan in 2006, when Lorri was President.  We moved the classes to Frankfort for the first time, for example, although its Big Bang theory of two class was a given.)  That means KREIA always tries to jam as many people as possible into a hotel room, and sessions feature a bar.  Today, that would require an enormous hotel room, because of 6-foot distancing and all the rest.  Bars are no help either.  Bars have been notorious Covid-19 super-spreader sites.

The result was that KREIA cancelled its September, 2020 classes.  That appears to have been the right thing to do for its business model.

But that is only one of the many KBHI approved providers.  At the end of the day, it is KREIA’s problem, not the KBHI’s.

Pointedly, it also is not the claimed factual basis for the Board’s Aug. action.

On its face, Dec. 31 is just arbitrary and capricious.  That’s particularly true in light of both SB 150 and the Board’s prior policy (adopted in March).  The date the Governor’s State of Emergency ends in the trigger date under both the prior Board policy and SB 150.  That timing also is the lynchpin of all other provisions in SB 150.  The prior KBHI policy synchronized with it, keying off the same expiration of the state of emergency.

Nothing in SB 150, or state law generally, or Governor Beshear’s Executive Order 2020-215, declaring the state of emergency, in any way calls for, mentions, or even connects with Dec. 31.

Just the opposite.  The state of emergency is built to last until Kentuckians are reasonably safe from Covid-19, one of the most deadly threats ever to fill our hospitals.

Infectious disease experts nationwide also are saying nothing magic about Dec. 31.  Just the opposite.

Instead, that so-called “twindemic” by winter is the consensus forecast of doctors.  That means we are most likely to be in the midst of a Covid-19 “second wave” this winter, complicated by the annual outbreak of seasonal flu – a ”twindemic.”

Hospitals got jam-packed enough with Covid-19 cases so far this year.  Add the seasonal influenza caseload and experts are worried.

The U.S. flu season is October through May each year, with a peak beginning in December and its apex in February.  The U.S. flu caseload for 2018-19 was around 490,561 hospitalizations with roughly 34,157 deaths (estimates like disease stats all have margins of error).  The year before, 2017-18, flu cases and deaths were nearly twice as high.

Stack that on top of Covid-19.  As of Wednesday, Aug. 19, the U.S. passed 5,528,900 Covid-19 cases and the numbers were rising relentlessly – nearly half of all cases worldwide, and the most of any nation on the globe, even though the U.S. has only about 4% of world population.  Covid-19 deaths in the U.S. topped 173,177 the same day – and are going up at over 1,100 a day.  Kentucky had about 41,000 confirmed cases and 900 deaths, both of which also were picking up.  Projections for coming cases through year-end also are the highest in the world, with or without a “second wave.”

Certainly not any real belief that the pandemic would be over by year-end! 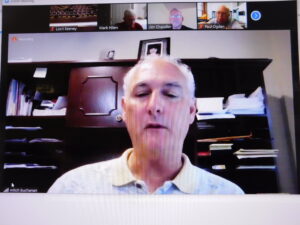 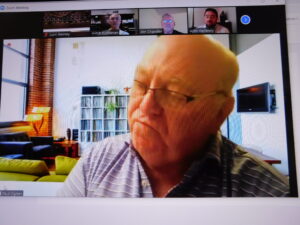 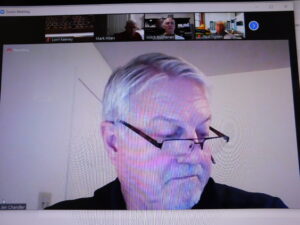